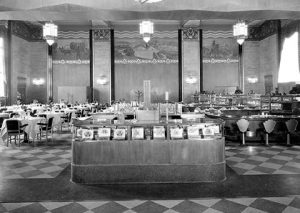 In 1862, President Abraham Lincoln signed the Pacific Railway Act, creating the Union Pacific Railroad and fixing its eastern terminus at Council Bluffs, Iowa. The major goal of Union Pacific was to lay railroad tracks west to join up with the Central Pacific Railroad and complete the first railway from the Missouri River to the Pacific Ocean – the Transcontinental Railroad. Because there was no bridge across the Missouri at that time, construction started at 7th and Davenport Streets in Omaha and headed west.

Several railroad stations came and went in Omaha’s early years. Construction of Union Station, which today houses The Durham Museum, commenced on July 29, 1929 on the site of the 1899 station. Rapidly increasing passenger rail traffic convinced Union Pacific of the need for a new building and it was decided a truly elegant and contemporary structure would best portray the image of the corporation. 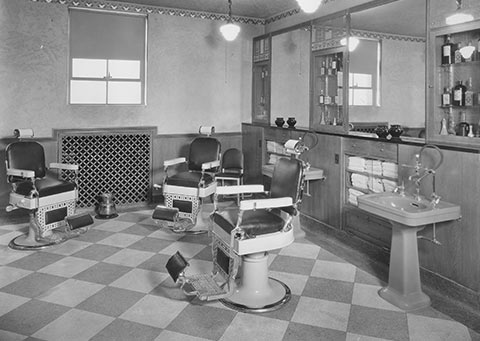 Gilbert Stanley Underwood, one of the finest architects in the classic art-deco style, was given free rein in designing the structure and his style is reflected in every facet of the construction. He utilized a terra cotta exterior overlay to create a visually stunning effect and was involved in all artistic decisions from the ceiling of the Main Waiting Room to the door handles on the ticket counter. Peter Kiewit Sons’ was commissioned to build Underwood’s steel framed structure. After twenty months and $3.5 million, the 124,000 square-foot building was complete.

The station opened to great fanfare on January 15, 1931 and quickly became one of the busiest stations in the nation. At its peak, 64 passenger trains and some 10,000 passengers utilized the facility every day. The focal point is the Main Waiting Room, currently the Suzanne and Walter Scott Great Hall. Measuring 160 feet by 72 feet, it is spanned by a 60 foot high ceiling. The Hall features a ceiling of sculptured plaster, with painted gold and silver leaf trim, ten cathedral-like plate glass windows, a patterned terrazzo floor, columnettes of blue Belgian marble, and a wainscoting of black Belgian marble. Six immense chandeliers, 13 feet tall, five feet in diameter, and suspended 20 feet from the ceiling, light the Great Hall. 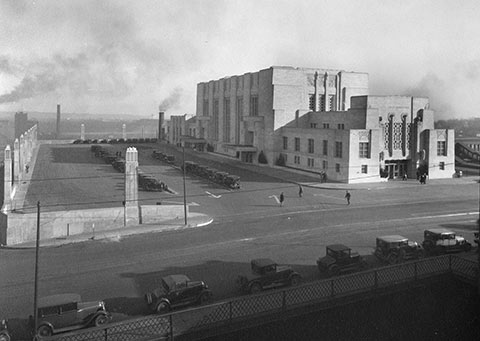 The station originally boasted thirteen sets of tracks located to the south of the building and served the Union Pacific, Rock Island, Missouri Pacific, Milwaukee, Wabash, Great Western, Illinois Central and North Western Railroads. Combining its efforts with the Burlington Depot made Omaha the fourth largest railroad center in the United States.

The station offered a wide range of amenities consistent with the needs of travelers on one of the nation’s major rail networks. These included a taxi stand, baggage check, dining room, gift shop and soda fountain, telegraph and telephone room, barbershop, first-aid station and a ladies lounge. During World War II the station established a USO center with letter writing facilities, a dormitory and shower/bath facilities. 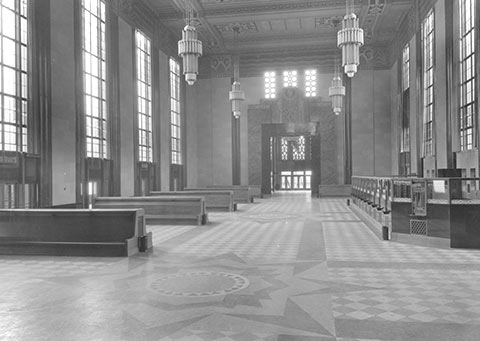 During the 1950s and 60s, increased air travel and the completion of major interstate highway networks significantly reduced passenger traffic on the nation’s commercial rail system. Amtrak, the Federal Government’s response to consolidating and maintaining a semblance of passenger rail traffic, resulted in the demise of private commercial passenger trains. The last passenger train departed Union Station in 1971 and the station closed its doors.

There was, for a time, talk of demolishing the building. Wiser counsel prevailed, however, and in 1973, Union Pacific Corporation donated Union Station to the City of Omaha. In 1975, a group of dedicated volunteers fought to save Union Station and made it the home of The Western Heritage Museum. In 1995, Chuck and Margre Durham led the charge for a major renovation of the structure that restored the current Suzanne and Walter Scott Great Hall to its original grandeur. In addition, mechanical systems, to include installation of air conditioning, were completely replaced, a new parking deck erected, and the station’s original Track #1 was covered over to allow for static display of Union Pacific rail cars.

In 2016, the building was designated a National Historic Landmark by the National Park Service and U.S. Department of the Interior. This designation recognizes Union Station as one of America’s artistic gems and ensures its preservation for future generations.