How did a metal box full of documents from Early Omaha end up in a Portland basement and make it back home again? In 2011, we received this box as a donation from a man in Oregon. He said that the box was found inside a basement safe in a property he owned. Amazingly, he made the effort to get the documents to “Omaha’s Home to History.” Looking through the documents, it is hard not to notice famous Omaha names, like: Bryon Reed, John Creighton, A. J. Poppleton, Andrew Hanscom, and “Enoc” Lowe. President Buchanan’s signature is on a couple of the land deeds.

John McCormick came to Omaha from Cadiz, Ohio and became a player in the burgeoning real estate market. In the 1860s, John and Jesse Lacey formed a wholesale grocery company called Lacey & McCormick. Later, John’s brothers, Albert and Josiah, joined the team and the company was renamed: John McCormick & Co. Many of the documents show the company name or that of John McCormick. So far, there are not any mentions of the dry goods business. Real estate must have been more profitable.

Some of the documents mention the extended McCormick family. There are checks from Cadiz that are signed with “S. McCormick,” likely John’s father Samuel. There are several bank records of Charles McCormick, one of John’s sons. An envelope has a note from Zera Snow, John’s son-in-law. Real estate must have been a family affair.

Census records show that two of John’s children moved to Portland, Oregon from Omaha. At some point, someone put the metal box of land papers in the basement safe, where they sat waiting for over one hundred years. The documents were well preserved in this dark, safe space. They are in incredible condition today.

Preserve those family documents and always check the safe! 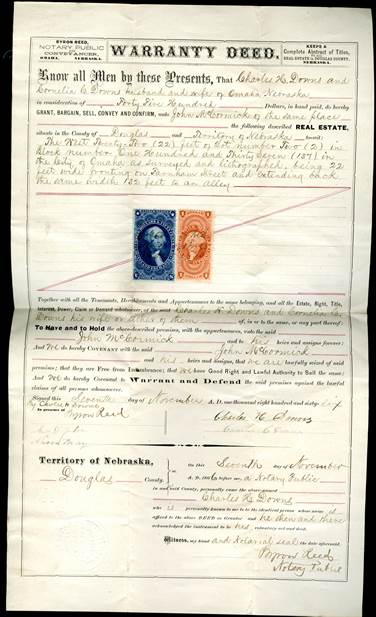 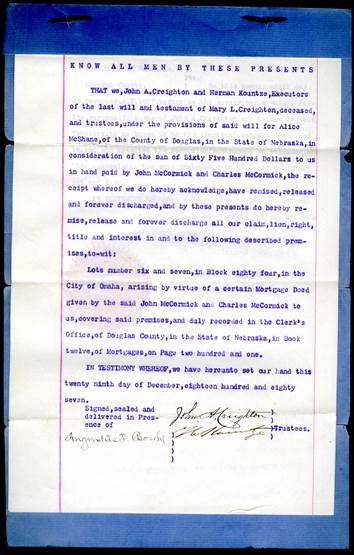 Land from the will of Mary Lucretia Creighton was purchased by John and Charles McCormick. 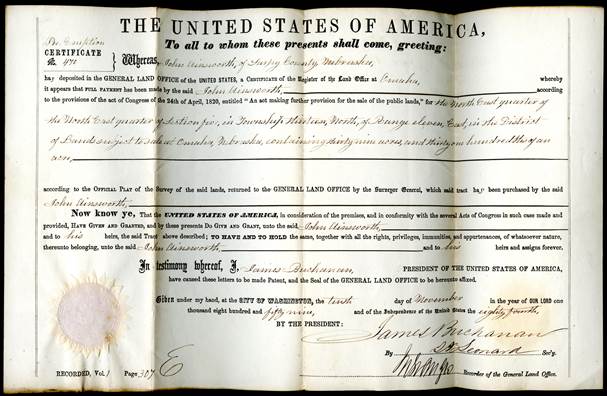 Deed from the U.S. Land Office, signed by President Buchanan.

Thank you for reading and see you next time,
Becky