History Through Pulitzer: “Raising the Flag on Iwo Jima” 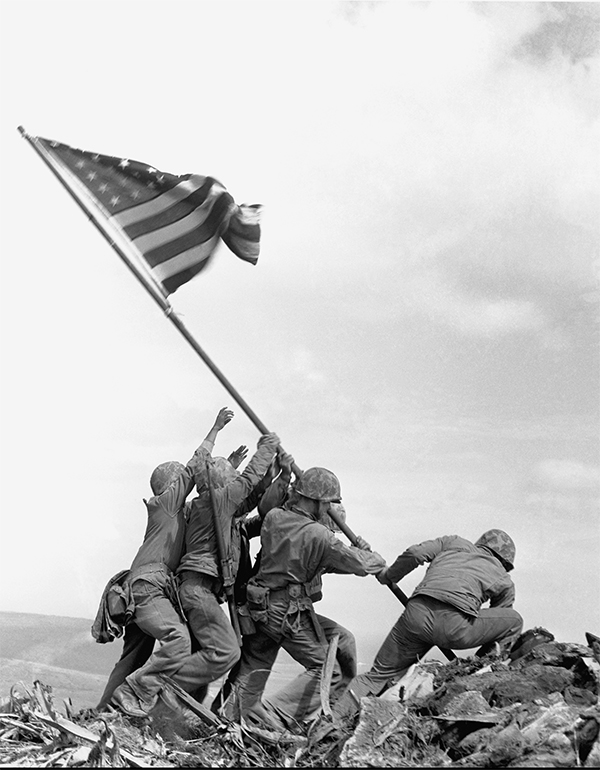 Pulitzer Prize-winning image taken by Joe Rosenthal of The Associated Press on February 23, 1945. It is entitled “Raising the Flag on Iwo Jima.”

“The most intriguing thing to me about the Iwo Jima flag raising photograph is that 75 years later it is literally everywhere. During the recent Super Bowl TV programing I counted three separate times that the flag raising photograph, video, or statue were shown. That’s three times in about 30 minutes on the biggest stage in America. For the past several years, you can drive around Omaha and see depictions of the flag raising statue on U.S. Marine Corps billboards all over town. The image is so recognizable and so embedded in our American culture that it has become a symbol of America itself. Quite simply it is the stuff of legend. In my opinion, it is the most iconic photograph in American military history, and I would certainly list it as one of the most iconic photos ever taken.

Over the past 75 years the photograph has come to symbolize bravery, determination, and unity. It certainly does encompass all of these hard to define concepts and gives us a visual representation of what they look like in action. For me, the photograph also evokes an awe-inspiring feeling of anticipation. The six Marines hoisting the heavy pole are midway through their task at the moment the photo was taken. They are all in motion, and at that exact moment the flag was still yet to unfurl. It’s almost as though the viewer is in a sense holding their breath waiting for that flag to crack open and reveal its stars and stripes. On February 23, 1945 there was still a great sense of anticipation about the war itself. Although the United States was winning on both fronts there remained uncertainty of how the war would end, when the war would end, or even if the war would end. So the six flag raisers in the photograph perfectly encapsulate their nation at that time, bruised and battle-hardened with a tough fight ahead, but nevertheless a nation on the verge of total victory with peace firmly in its sights.”

Eric Krelle is a proud fifth-generation Omahan. By day he’s a product development guru at Oriental Trading Company, but by night he turns into a U.S. military history fanatic. He is a founding member of an Omaha-based World War II reenactment and living history group, the World War 2 Guys, where he brings history alive at public events throughout the year.

In 2014 the Omaha World-Herald reported on research done by Krelle and Stephen Foley of Ireland, which called attention to the identities of the flag raisers and the possibility of mistaken identification of one of the men. Their work led to a correction from the U.S. Marine Corps on the man’s identity and was the focus of a Smithsonian documentary.

The “Pulitzer Prize Photographs” exhibition is on display at The Durham Museum from February 22 – through May 3, 2020. The exhibit features the most comprehensive collection of Pulitzer Prize-winning photographs ever assembled and was developed by the Newseum.