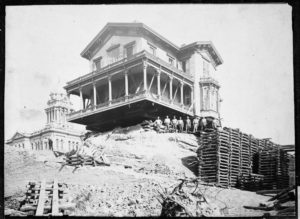 Exhibit on display August 17, 2019 – January 17, 2021
To combat six major hills in downtown Omaha the city undertook extensive street projects to lower inclines. This work was done throughout the 1880s–1920s with the largest of the projects being the grading of Dodge Street in 1920. In some locations, buildings were brought down to a new level 18 feet lower than the original foundation. Tempers ran high between neighbors going mad with the constant noise, businesses and homes being literally uprooted and some downtown residents even suing the city for damages and lack of sleep. In the end, the grading of Dodge Street cost over one million dollars and moved over 300,000 cubic yards of dirt. Through this photography exhibit, see what all the fuss was about and how times have changed the streets of downtown Omaha.