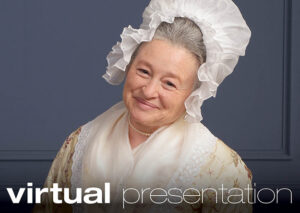 Scholars in Residence: Martha Washington, Portrayed by Carol Spacht
Martha Washington was raised from childhood to become the mistress of a Virginian plantation.  Her destiny changed when the 13 colonies of America declared their independence from Britain. As the wife of the commander-in-chief, Mrs. Washington was instrumental throughout the revolutionary war, joining her husband at the winter encampments. When duty called again and her husband was elected as President, she reluctantly created a new role as our “first”  first lady. In telling her own story, as well as recounting the stories of some other remarkable Revolutionary Women, Martha Washington provides a clearer understanding of the unique role women played in the building of our nation.

Questions? Contact the Education Department at 402-444-5027 or email education@DurhamMuseum.org.