Our Collection is home to a large number of medical tools, largely from the late 19th and early 20th Centuries. Some of these tools are stamped with the doctor’s name or initials, showing us that a large number of these belonged to Dr. John E. Summers, a prominent surgeon in Omaha. An editorial in the April 1932 issue of the Nebraska State Medical Journal described him as an “esteemed teacher, colleague and friend of the medical profession, who without question has done more for the advancement of modern surgery in Nebraska and the Middle West than any other person.”

He moved to Omaha in 1885 after completing medical school and studying in Vienna. Dr. Summers was particularly renowned for his treatment of wounds and abdominal surgery. He is credited as the first surgeon to perform an appendectomy on an infant and was applauded for once performing heart surgery, sewing up the heart sac that had been punctured with a knife, saving the patient’s life. Over his career, he was a member of numerous medical societies, taught at Omaha Medical College, served as chief surgeon at several area hospitals, and was surgeon general of the Nebraska National Guard.

When Dr. Summers passed away in 1935, it was front page news in Omaha. He was eulogized by Dr. William J. Mayo, one of the founders of the Mayo Clinic, who in 1932 called Dr. Summers “one of those great leaders of the generation” in the Missouri Valley. A small sample of Dr. Summers surgical tools in our collection are pictured. You can also see representation of his work on display here at the Durham Museum in the Bishop Clarkson Community Gallery, in the ledger from Bishop Clarkson Memorial Hospital (indicated in red). 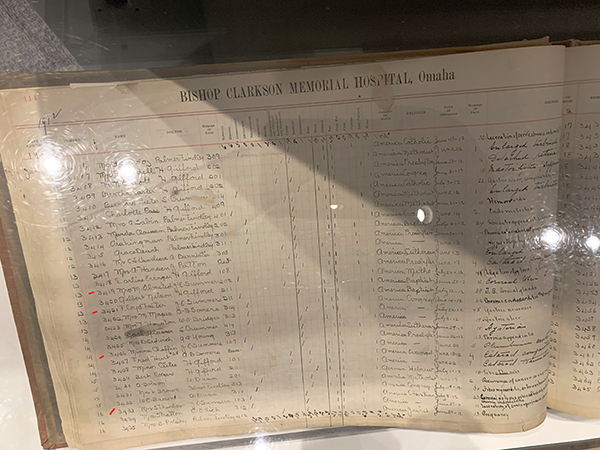 Thank you for reading and see you next time,
Becky